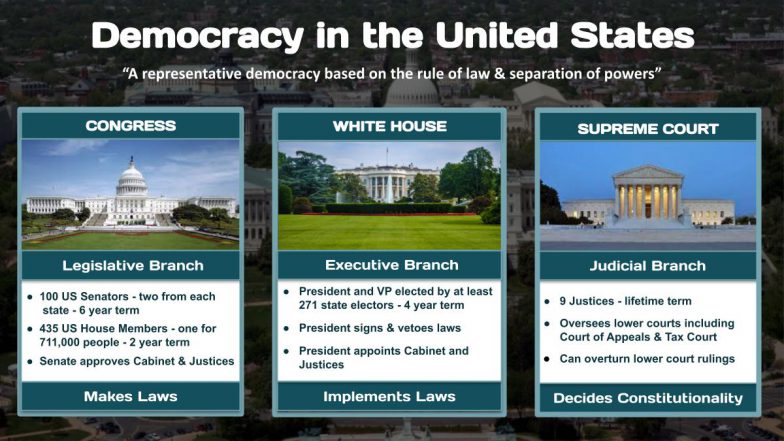 The federal government is composed of three distinct branches: legislative, executive, and judicial, whose powers are vested by the U.S. Constitution in the Congress, the president and the federal courts, respectively. The powers and duties of these branches are further defined by acts of Congress, including the creation of executive departments and courts inferior to the Supreme Court.

The full name of the republic is “United States of America“. No other name appears in the Constitution, and this is the name that appears on money, in treaties, and in legal cases to which it is a party. The terms “Government of the United States of America” or “United States Government” are often used in official documents to represent the federal government as distinct from the states collectively. The terms “Federal” and “National” in government agency or program names generally indicate affiliation with the federal government.

i
Stories about Why Democracy matters to me

In this tab are mostly short videos and articles stories by politicians and the public about “Why democracy matters to me”.

Note: At the conclusion of  our “Today onAir” aircasts, we will be highlighting and recording similar stories from our Zoom audience. Our curators will be posting these stories here in the “Videos” and “Articles” tabs.

From the website DemocracyMatters.org   Democracy Matters mission is to empower students with a voice in politics, with the skills for life-long civic engagement, and with the passion to create a socially just, fair, and inclusive democracy.

Part of our mission is to encourage voting and voting rights reform. I think it’s important because, as we have these issues in the street where people are marching for the greater good, we must remember that it must be tied to political outcomes. Otherwise, we’ll be having this fight over and over and over. We must get people in office that will listen to the concerns of the greater society and be able to pass laws to address those issues. If we don’t do that, I’m afraid this whole movement won’t be as successful as I think it has an opportunity to be. We need people to vote. We need people to engage. We need people to hold their representatives accountable.

I found out when I started Democracy Matters many years ago is a lot of young people didn’t know how to go out and engage, how to go out and create social movements. So I always tell them that the most power you have is the power to being able to talk to each other. What we have to learn to do is to truly engage without rendering judgment about where people stand. We really need to have colleges where uncomfortable conversations must be had. Especially on college campuses, we have to get back to really talking to each other, rather than talking at each other. We are in a moment where people are open to really thinking about the worldview that they inherited, and it’s being challenged in many ways.

What does democracy mean to you?
PBS NewsHour, US Students – October 29, 2020
“Why democracy matters”
Ian Bremmer – May 5, 2014
Why Democracy Matters
Ripon Forum, Condoleeza Rice (Short)

Freedom is our Best Ally

The United States has got to stand for the universality of freedom and the universality of democracy. It has to stand for it because it is right — it is the moral thing to do — but also because it is in our interest to do so. President Reagan, in his second inaugural, had one simple line that captured that. He said, “America must remain freedom’s staunchest defender, for freedom is our best ally.” Remain a staunch defender because it is right, but also because freedom is our best ally.

Guided by History, not Headlines

There is finally the argument, perhaps more difficult and mostly used in the Middle East, that when you have democracy – when you have elections before a society is fully matured and civil society in the like – sometimes the bad guys win. And what do you do when the bad guys win? We faced this quite a few times during the period of my tenure in office. We saw Hamas win in the 2006 elections in the Palestinian territories. We saw Hezbollah do well in the 2005 elections in Lebanon. We saw Islamist parties do well in the first elections in Iraq.

History has a long tail, but that long tail only comes out in our favor if we’re true throughout the whole entire period to our values and to our principles. We have to stand for democracy, and we cannot be neutral about what form of government is right.

Innovation and the US Government

What the U.S. Innovation and Competition Act Gets Right (and What It Gets Wrong)

Skip to toolbar
We use cookies to ensure that we give you the best experience on our website. If you continue to use this site we will assume that you are happy with it.Ok